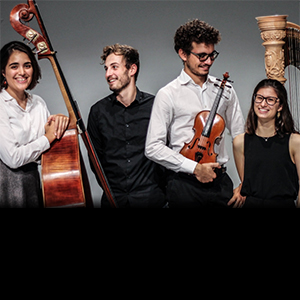 The group was created to perform for the chamber music exams at the Conservatorium and by 2019 grew into its final shape with the addition of its news element, the double bassist Edgar Milhões.

Since then, the ensemble has arranged and performed some of Mahler’s songs, such as “Um Mitternacht” and “Ich bin der Welt abhandengekommen” and a new project to spread Portuguese music, by a concert that showcases the various styles of Portuguese music, from classical to traditional to contemporaneous.

They are now working as well on a program that mixes music from Spain and from Argentina.