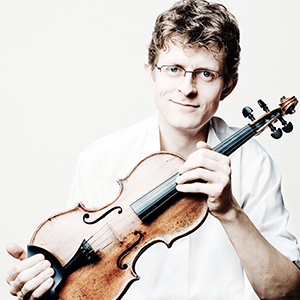 Award-winning Dutch violinist Tim Kliphuis has created a brand new style that embraces classical, gypsy jazz and folk. Hailed as a ‘current-day improvising Paganini’, his inclusive approach to music has united audiences and is influencing a new generation of string players.

After his master’s degree in classical violin at the Amsterdam Conservatoire, Kliphuis studied with the European Sinti gypsies. He recorded and toured with gypsy guitar legends Fapy Lafertin, The Rosenberg Trio and Angelo Debarre.

An invitation to the Richard Strauss Festival in Germany kick-started Kliphuis’ crossover career, celebrating a ‘total music’ without stylistic barriers. He performed for the Dutch King at the Amsterdam Concertgebouw, for Celtic Connections Glasgow, at the Django Reinhardt Festival in Samois-sur-Seine and toured America, South Africa and Russia extensively.

In 2015, The Tim Kliphuis Trio (Nigel Clark, guitar and Roy Percy, double bass) premiered Vivaldi-based ‘Reflecting the Seasons’ which was recorded on Sony Classical in 2016; ‘Brandenburg’, based on Bach, and the Kliphuis Violin Concerto followed in 2018.

Tim Kliphuis and his Trio have shared the stage with Les Paul, Richard Galliano, Frankie Gavin and Martin Hayes, as well as the Netherlands and Tallinn Chamber Orchestras, The Hague and Cape Town Philharmonic and Sinfonietta Amsterdam.

Kliphuis is an in-demand educator at festivals, competitions and conservatoires. He wrote the best-selling book “Gypsy Jazz Violin” and teaches improvisation at the Amsterdam Conservatoire, at his own Academy for Improvising Strings, and the gypsy jazz summer school Grappelli-Django Camp. He is a DPA Microphones and Pirastro Strings artist.