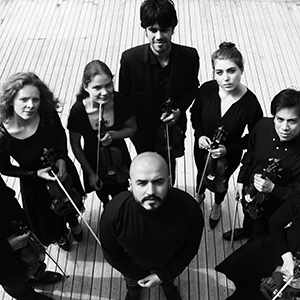 Shapeshift is a flexible performing ensemble, or band, collective and orchestra! Shapeshift is based in The Netherlands and is a composer-performer’s collective. Shapeshift brings exceptional and unusual music productions performed by the best soloists of the new generation, combining quality, vast possibilities, adventure, imagination, excitement, experiment, and unprejudiced freshness with a sharp artistic vision.

Come to our shows and be surprised! First and foremost, we bring exciting and brand new music of high quality. In addition, Shapeshift retakes recent music that hasn’t yet received the attention – or performance – it deserves. As it is very interesting to hear parallels, precursors and relationships between music written in different periods, Shapeshift as well combines new music with music of earlier eras.

Shapeshift works in close collaboration with composers, tailored to their methods. The composition of the group varies depending on the needs of the production. The size can range from small to very large, while still retaining the unique character and personality of Shapeshift. This all makes sure the ensemble is the perfect basis for bringing innovative ideas into practice.

Shapeshift doesn’t just serve a niche, but is there for all listeners that are open for an enriching experience. We strive to create an open culture, without artificial barriers. Good communication is a key factor. We connect composers, musicians, listeners and the music itself, resulting in complete involvement and intensifying the experience and understanding of the music.

Emmy won several times prices during the Maasluise Muziekweek, Inter Provinciaal Muziek Concours, Rabobank Concours and the Prinses Christina Concours. In 2002 she received the 2nd price and the price for the obligatory peace during the Iordens Viooldagen. In 2005 she won the 1st price and the Herman Krebbers price (obligatory peace) during the Davina van Wely Concours. In 2009 and 2011 she ended as 3rd and 4th during the Nationaal Vioolconcours Oskar Back and in 2011 she also won the price for the obligatory peace. In 2011 she also received the Anton Kersjes price. She played the Zigane from Maurice Ravel with the National Student Orchestra conducted by Lucas Vis in February 2012, and was invited to the NJO Music Summer as Artist in Residence, where she played 4 programs, one of them the Korngold Violin concert with the National Youth Orchestra and Conductor Antony Hermus. So in the mean time she doesn’t only play in a lot of orchestra projects, but regularly she is asked as a soloist as well.

When she was 5 years old, Emmy Storms (Katwijkaan Zee (Netherlands), 1988) started to take violin lessons from Stieneke Voorhoeve-Poot, following the Suzuki-method. 3 Years later she was admitted to the Young Talent Class of the Royal Conservatory of The Hague (Netherlands) with teachers Qui van Woerdekom and Koosje van Haeringen. From that time she played in the Viotta youth orchestra and the Athenaeum Chamber Orchestra (AKO), first as a tutti violinist, later as a concertmaster. In 2006 she was admitted to the bachelor education of the same conservatory, and studied with Jaring Walta. From 2007 she was regularly concertmaster in the National Youth Orchestra (NJO). In 2012 she finished her Orchestra Master with a distinction, still studying with Walta. For this Master she followed an internship for 9 weeks with The Hague Philharmonic.

Anna Britala was born in Riga, Latvia, where at the age of six she also started violin studies at Emils Darzins Music Secondary School with teacher Igors Dorins. Her further education includes Bachelor of Music in Amsterdam Conservatory 2008-2013 with professor Ilya Grubert, and Master of Music in Utrecht Conservatory with professor Elisabeth Perry 2013-2016.

Apart from classical violin studies, Anna has also studied composition for a year and since 2012 is also a member of the Amsterdam- based jazz and pop string quartet Quintessences. Her biggest passion in music is playing together with other people: apart from being a part of ShapeShift, she occasionally plays with Intercontinental Ensemble, leads the Gouwe Hart Orkest  and has worked with groups such as the Radio Filharmonisch Orkest, Symfonieorkest Vlaanderen, Gustav Mahler Jugendorchester, Lucerne Festival Academy and Alumni, Rietveld Ensemble and Fenrych Quartet.

Violinist Andrii Chugai originates from Kiev, Ukraine. He graduated from the National Music Academy of P. Tchaikovsky in Kiev. Since 2013 he has been studying in a Bachelor program in the Netherlands with professor Boris Belkin at the Maastricht Conservatorium. Andrii has performed in the major concerts halls of Ukraine with the National chamber orchestra “Kiev Soloists”, both as a member and as a soloist.

Andrii has participated in many chamber and solo music performances all around the world including Switzerland,Italy, Netherlands, Belgium, Germany, Ukraine, and Russia. He took a part in many master courses including Accademia Musicale Chigiana in Siena (Proff. B.Belkin).
He is a winner of international competitions including Kotsiana (Czech Republic), and first place wins in “Silver Bells” (Ukraine, Uzhgorod), International music competition “Citta di Crotone” (Italy) and “XXI Century Art” (Ukraine, Kyiv- Vorzel).

Born in 1991 Russia into a musical family, Maria started studying the violin aged four with Vladimir Bobylev, and completed her Master degree in the Amsterdam Conservatory, under the guidance of prof. Ilya Grubert. A former artist in residence at the Queen Elisabeth Music Chapel in Belgium under Augustin Dumay. Currently, Maria is pursuing her Artist Diploma at the Guildhall School of Music and Drama under prof. David Takeno, generously supported by the Guildhall Scholarship for the academic year 2016/2017.

Fiona is based in Amsterdam and the UK, where she regularly performs with a number of different orchestras and ensembles including the BBC Scottish Symphony Orchestra, the Nederlands Philharmonisch Orkest, AKOM Ensemble and Philharmonia Amsterdam. She recently graduated from the Conservatorium van Amsterdam, where she studied with Ilya Grubert and Maria Milstein, and she previously obtained a 1st class honours degree from the Royal College of Music in London, where she studied with Jan Repko.

Fiona has appeared as soloist with the Scottish Festival Orchestra, the Glasgow Chamber Orchestra and Chetham’s Symphony Orchestra, performing, among others, the Berg, Sibelius and Bruch concertos. Recent engagements have included recitals at the Muziekkamer in Zaandam and the Papagenohuis in Laren with pianist Jaap Kooi.

Fiona has a special interest in contemporary music and has performed works by Louis Andriessen, Salvatore Sciarrino, Edith Canat de Chizy and Boris Bezemer. In 2014, she recorded a set of solo violin pieces called ‘SPOTS’ by the Italian composer, Simone Fontanelli, and in 2015, she was the winner of the inaugural Contemporary Music Competition at the Royal College of Music.

Fiona is a former and founding member of the London-based Manon Quartet, which regularly performs at venues and festivals throughout the UK, including the Wigmore Hall and St.-Martin-in-the-Fields. She has appeared in masterclasses with Alina Ibragimova, Christoph Richter, Pavel Fischer and members of the Chilingirian, Ysaye and Smith quartets. She has also appeared live on BBC Radio 3, performing quartets by Brahms and Haydn.

Eduardo has received chamber music coaching from members of the Orlando, Vermeer, Alban Berg and Schoenberg quartets as well as regular training at the conservatory from Dimitri Ferschtman and privately by Jaques Rouvier. Eduardo acted as guest concertmaster of international festival chamber and symphony orchestras and substitutes regularly in the Netherlands Philharmonic, Rotterdam Philharmonic, and Netherlands Chamber Orchestra.

As recitalist and chamber musician, Eduardo has performed in major concert halls including recitals in the Concertgebouw in Amsterdam and Carnegie Hall in New York, and performed as soloist in Holland, England, Wales, Belgium, Slovakia, Sweden, China, Bolivia, Argentina, Uruguay and Brazil. He has collaborated in chamber music concerts with many artists including Alberto Lisy, Gordan Nikolic, Per Nystrom, Gary Hoffman, Alexander Zemtsov, Zlata Chochieva and Nikolay Shugaev.

Imogen Eve is an Australian violinist and artistic-musical director based in the Netherlands.
She completed her Bachelor degree at the age of 20 in Classical Violin (specializing in Performance) from the Queensland Conservatorium of Music, under the tutelage of Michele Walsh. She then went on to study at the Australian National Academy of Music with Robin Wilson. During her studies, she won a number of awards including the QCGU Paganini Prize, the Dulcie E.E. Kappe Award, the 4MBS Chamber Music Competition, the QCGU Postgraduate Award and the Ena Williams Postgraduate Award.
As a chamber musician, Imogen has benefitted from the guidance of Howard Penny, Graeme Jennings, Kathyrn Lockwood, David Dolan, the Brodsky Quartet, The Goldner Quartet, the Aurora Orchestra, the Australian Chamber Orchestra and the Tinalley Quartet – and has had the privilege of performing chamber music with Australian music icon; William Barton.
Imogen has additionally trained and performed extensively in multiple musical styles; Contemporary Classical Music, Gypsy, Klezmer, Pop/Rock and Stage Acting. This versatility has led her to have a strong interest in improvisation, arranging and interdisciplinary arts projects.

Shalygin has participated in many international competitions. For his “Letters to Anna” symphony for violin solo he obtained an honorable mention at the 2012 Gaudeamus competition. In the same year his music was selected for Lars von Trier’s “Gesamt” project. Shalygin was a composer-in-residence in IZOLYATSIA, Platform for Cultural Initiatives (Donetsk, UA) and at the Storioni Festival (Brabant, NL). His works have been performed at many music festivals worldwide, including Gaudeamus Muziekweek (NL), Musical Contrasts of the 20th Century (RU), Musical Youth Tribune and GOGOLFEST (UA), GAIDA Festival (LT), and CIME/ICEM (US). Leading contemporary music ensembles who have performed his works include Asko|Schönberg, Amsterdam Sinfonietta, DoelenKwartet, Insomnio, Nieuw Ensemble, Slagwerk Den Haag and Keuris Quartet.

Shalygin began studying composition seriously at the age of sixteen with Irina Ivashenko. In 2004 he trained for one year with Boris Tishchenko at the N. Rimsky-Korsakov St. Petersburg State Conservatory (RU). He received his first master degree in 2010 at the National Music Academy in Kiev (UA). One year later, in 2011, Shalygin received his second master degree at the Royal Conservatory of The Hague (NL), where he studied with Cornelis de Bondt and Diderik Wagenaar. He currently lives and works in the Netherlands.