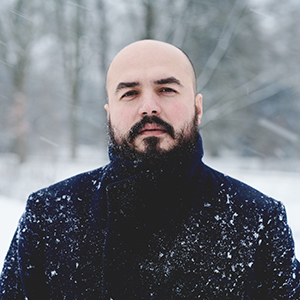 “Creativity is an unconscious act of insanity, in a burst of which the truth is born. No matter how beautiful or disgusting it may seem to people far from madness, its value is beyond doubt, both for the author and for those able to sense its invisible beauty.

After all, gratitude for endless trials and suffering brings joy and blissful emptiness… Being shocked by music is about pain turning into beauty and getting under your skin, taking away your breath; about everything stopping to move. I want to be scratched inside by sound and experience the fleeting, invisible beauty”.

Maxim Shalygin was born in Ukraine on January 30, 1985. He began studying composition seriously at the age of sixteen with Irina Ivashenko. In 2004 he trained for one year with Boris Tishchenko at the N. Rimsky-Korsakov St. Petersburg State Conservatory (RU). He received his first master degree in 2010 at the National Music Academy in Kiev (UA). One year later, in 2011, Shalygin received his second master degree at the Royal Conservatory of The Hague (NL), where he studied with Cornelis de Bondt and Diderik Wagenaar. He currently lives and works in the Netherlands.

Spiritual quests always involve some degree of confidence. Confidence in something that exists beyond the surface of this material world. Something beyond the horizon, beyond the borders of the visible. Transcendence and reunification with oneself are two phases of being. The true artists of all times have been pilgrims on this road. Maxim Shalygin is one of them, not following the footsteps of his predecessors but heading for the same destination.

For over ten years, Maxim has been occupied with a project for a lifetime: music for solo instruments. “The most concealed, intimate and deep things can only be expressed by a single instrument,” he says. In each of his solo works Shalygin reaches an exalted state, giving the instrument a special voice. The “9 Preludes” for piano solo, the “Letters to Anna” symphony for violin solo, “Musique de fer” for one percussionist and “Trembling Music” for accordion solo are the results of close cooperation with such unique performers as Antony Baryshevsky (piano), Emmy Storms (violin), Konstantyn Napolov (percussion) and Vincent van Amsterdam (accordion), respectively. On the other hand, Shalygin explores writing for symphony and chamber orchestras. His works, “Passacaglia Esmoll,” “Triple Concerto Des-dur” and “Lullaby” for strings have been performed in many concert halls.

Another important thread throughout the composer’s work is music for ballet. His cooperation with choreographer Lonneke van Leth resulted in scores for several ballets: “Suite – Homage to Alfred Schnittke,” “Nachtnet” and “Odysseus,” that were performed during the Holland Dance Festival and have enjoyed successes in many Dutch theaters.

Shalygin is the author of a wealth of electroacoustic compositions. He considers some of these as a kind of musical cinema. “Two Hours in Reservoir” (using Joseph Brodsky’s recitation voice) and “When everything ends, we start to sing our songs” are musical works of over 50 minutes in length with ‘plots’ that engage the listener in ever-changing streams of sound shapes.

Shalygin’s vocal music constitutes the most characteristic and intimate part of his work, its very heart. It is not concert music in the usual sense — it is poetry recited by a voice and an instrument (the piano) combined. It is music written for its own sake, which becomes a heritage of others.

Shalygin has participated in many international competitions. For his “Letters to Anna” symphony for violin solo he obtained an honorable mention at the 2012 Gaudeamus competition. In the same year his music was selected for Lars von Trier’s “Gesamt” project. Shalygin was a composer-in-residence in IZOLYATSIA, Platform for Cultural Initiatives (Donetsk, UA) and at the Storioni Festival (Brabant, NL). His works have been performed at many music festivals worldwide, including Gaudeamus Muziekweek (NL), Musical Contrasts of the 20th Century (RU), Musical Youth Tribune and GOGOLFEST (UA), GAIDA Festival (LT), and CIME/ICEM (US). Leading contemporary music ensembles who have performed his works include Asko|Schönberg, Amsterdam Sinfonietta, DoelenKwartet, Insomnio, Nieuw Ensemble, Slagwerk Den Haag and Keuris Quartet.