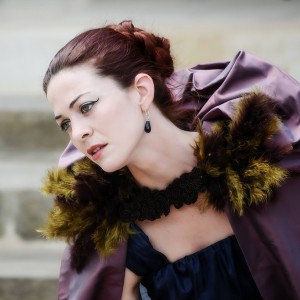 She participated in masterclasses with Dalton Baldwin, Max van Egmond, Johannette Zomer, Trevor Pinnock, Angelika Kirschlager and Deda Cristina Colonna. She has taken a special interest in baroque music, baroque dance and the art of historic gesture, for which she has been working with Margit Legler en Reinhold Kubik. She sang her debut as Second woman in Purcell’s ‘Dido and Aeneas’ in Milano, Italy, the leading role as Melpomene in ‘Il Parnaso Confuso’, and the role of Atalanta in ‘La Corona’, both by Gluck, in productions of the Mozart Opern Institut Salzburg, directed by Josef Wallnig in Salzburg and Vienna. This September she will be singing the leading role in ‘Didone Abbandonata’ by domenico Sarri in Poland and Czech Republic.

Convivio d’Arte. Her latest recitals with were in collaboration with Jan Cizmar- theorbo and lute, and Jean-Sébastien Beauvais- countertenor, in the Netherlands and in Czech Republic as part of the Concentus Moraviae Festival.

Her repertoire goes from renaissance to contemporary music, and contains chamber music as well as oratorio and opera.