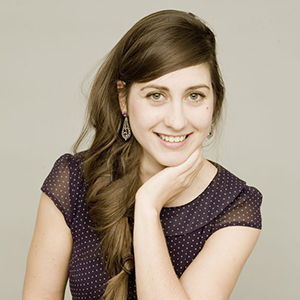 The Dutch soprano Kirila Kraal (1986) was born and raised in Amsterdam. From an early age music and theatre played a important role in her life. At twelve, she began to study singing with the soprano Bernadette Bouthoorn. Subsequently she studied with mezzo-soprano Wieke van Wingerden, until she started to attend her studies at the Conservatory of Amsterdam. In 2008 she won the Encouragement Award at the Princess Christina Concours. After her Bachelor’s diploma she studied private with Margreet Honig, who is still coaching her at present.

In June 2011 Kirila graduated from her Bachelor’s at the Conservatory of Amsterdam, where she studied with baritone Pierre Mak and coach David Bollen. In 2012 Kirila lived both in Weimar and Berlin, where she was coached by Soprano Anna Samuil.

Kirila performed alreday during her studies roles as Liu, Dido, La Contessa and as a soloist in several productions with Yo-Opera. Later she sung with the Rotterdamse operadagen, Grachtenfestival, De Diamantfabriek and Kiezoper Berlin. This season she sang 1st lady in the Electric Flute with Opera Spanga.

Besides Opera, Kirila also really loves to sing Lied. With pianist Daan Boertien she forms a Duo. Together they were accepted for the Udo Reinemann International Masterclasses in Brussels.

In Februari 2016 she performed Mahler 4 with conductor Leonard Kwong at the Haitinkzaal at the Conservatory of Amsterdam.

In 2017 Kirila sang the role of Michaela in the Carmen production of Tania Kross, Krossover productions.

Besides singing, Kirila organises her own opera productions and festivals. In 2011 Kirila programmed and directed the opera festival Stof, Wol en Opera that took place at the Noorderparkkamer, a theatre in Amsterdam, over a period of six weeks. In August 2012, she was in charge of an opera program in the north of Amsterdam as part of the Grachtenfestival.

Kirila received in 2013 a grant from the Staetshuysfonds, for her classes with Margreet Honig and vocal coach Brian Masuda.