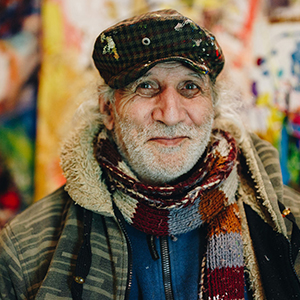 Jamal Khamis was born in a refugee camp named Al-Arroub, Palestine, on the 1st of May 1952. Growing up impoverished, he still managed to attend a school established by the UN. It was here that he was discovered by his Bethlehem originating art-teacher Jacob Polis.

As a child, Khamis was always busy drawing. At school he sat, dreaming, scratching on benches, observing the crowd. He discovered the world by chance while pursuing a runaway goat. He discovered that there was more than just the camp he lived in. There was a valley, the mountains surrounding it, the Dead Sea and even the heavens above. After visiting family in Jerusalem, he asked himself if the world never ends. Learning History and geography took him out of this confusing isolation.

In 1967, Khamis and his wounded mother were driven to the Jordan Desert, entering a camp named Talbieh, Jordan. Here he continued studying until he turned twenty years old.

Khamis continued to crave expressing himself. He did so by drawing and painting on walls, floors and paper. This behaviour made him catch the attention of the Gutte Institute. Being convinced of his potential, they stimulated him to continue his works and informed him about European art. This caused Khamis to become fixated with Van Gogh.

In 1973, wanting to study at an art academy, he travelled to Berlin. He was shocked when he entered the metropolis. Dazzled by this modern German city, some of his first thoughts involved how great of a shock it would be, if the inhabitants of earth would encounter creatures from other planets. Khamis started studying as a guest in Remscheid. He continued to study until he participated in an art contest, where he won his first prize.

Thanks to the positive reception of his artworks. It became possible for him to study at the Art Academy of Frankfurt in 1976. He studied here irregularly and soon became part of the Painting Association of Frankfurt. Working together with other artists, he was able to do more work than previously possible in school.

After finishing his art education in Frankfurt, he visited several academies. These academies resided in Remscheid, Paris, Amsterdam and Rotterdam. Khamis studied different art directions, but was not satisfied. Instead, Khamis chose to follow his own path, sticking to his own unique skills and conceptions.

Up until 1982, Khamis exhibited his work extensively throughout Germany, making a name for himself. Afterwards, he ended up repeating this in Jordan. He went to Paris in 1983, where he attended several academies and held multiple exhibitions. Even though Khamis went back to Jordan to do more work, his thoughts stayed with Van Gogh.

In 1986, Khamis extended his reach by becoming more of an international artist. Exhibiting in places such as America, Japan, Canada, Australia, Sweden, the Netherlands and Denmark. His work was included in several encyclopaedias and books published in Italy, Switzerland, Germany, Kuwait and America. Khamis founded the Dutch Artist and Creative Intellectuals Foundation (1994) and an artist collective named the Toro Action Art Movement International (1999). Furthermore, Jamal Khamis became the only Palestinian artist to be included in The World Art Collection (2002). Artworks of Khamis became well-spread in the collections of museums, royal families and private collectors.

During an artistic journey of more than thirty years, Jamal Khamis succeeded in developing his own ways, which he calls ‘feeling art’. Khamis’ concept of art lies at the basis of feeling art. He does not believe in art that can be understood by reason. He is interested in uttering feelings, rather than focusing on theoretical matters such as technique and composition. According to him, human emotions cannot be changed by a learning process. Unlike mathematics, he believes that beauty, the human soul and infinity cannot be understood by logic or reason. For instance, beauty is not governed by rules, it is free and sovereign. It appeals to our emotions, the subconscious, as well as the imagination of the painter and observer. In Khamis’ view, beauty is infinite. He compares his sense of beauty with dreams. Dreams have no geographical boundaries, they are unhampered and unrealistic. Khamis says that dreams communicate with deep subconscious human emotions and cannot be explained rationally. True creativity comes from within; it finds expression in the odd and extraordinary.

The abstract work of Jamal Khamis is marked by surprising colours, powerful plasticity, and a free, unstudied composition. Warm and cold colours evoke his emotions and steer the conceptual process. The colours seem to gush from an inner source, not from logic. Some compositions appear calm or dreamy, as if the viewer is not observing a painting, but seems to be listening to relaxing music. Other paintings are harshly coloured and wild of composition, as if painted out of a deep subconsciousness. His composition and colouring always appears to be in complete harmony. Khamis paints with emotions that are unrestricted. He works fast, not because he wants to, but because the spontaneity of his working method generates an explosive burst. He views the result as an explanation of his philosophy on beauty.