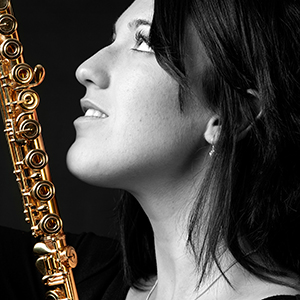 Sherezade Jurado Navarro was born in Nerva (Huelva, Spain) in 1993. She finished in June 2013 her Bachelor of Music in the speciality of transverse flute at the “Conservatorio Superior de Música Manuel Castillo” of Seville with the flutist Luis Orden Ciero, being 20 years old. Subsequently she completed the Postgraduate Course in Transverse Flute with the flutists Clara Andrada and Silvia Careddu, at the “Conservatorio Superior de Música Bonifacio Gil” of Badajoz in 2014, as well as she improved her musical skills at the Academy “Progreso Musical” of Madrid, with the flutists José Sotorres and Felix Renggli. During her studies she received additional education taking lessons with professional flutists around the world: Leon Berendse, Jacques Zoon, Alexa Still, James Gordon Lyman and Wéndela van Swol, among other flutists.

Other important activities that helped her to improve as a musician are her active involvements in several chamber music and soloist competitions, where she won multiple prizes. The most important are the Dutch International Flute Competition in Ittervoort (Limburg, April 2016), where she won the First Prize in the Master category; and the Composition Competition Alba Rosa Viëtor (Utrecht, October 2016), where she peform for the first time the piece “Huithrothroy”, by Igor Coelho A. S. Marques, which won the Second Prize. Moreover, she joined various youth orchestras, performing several times as soloist. She is member of “Het Grachten Trio” and she performs flamenco with several groups, where she experiences a different type of music. All these activities has broadened her experience and musical skills.

Recently, she got her Master Diploma in Classical Music at the Conservatorium van Amsterdam with Marieke Schneemann as her main teacher, receiving lessons as well by Kersten McCall and Vincent Cortvrint. Moreover, in 2016-17 she was accepted at the NedPho Academy, the Orchestra Academy of the Nederlands Philharmonisch Orkest.

Nowadays, she works periodically with Tenerife Symphony Orchestra (Spain) since 2014, offering also chamber music and solo concerts around The Netherlands.
Moreover, she is Flute teacher in the project “SuperSymphonics” at the “Muziekcentrum Zuidoost” (Amsterdam).

RT @RayburnConcert: This has got to be one of the highlights of 2019 for us... When @JamTheatreUK performed, with choreography, at the @Oo…