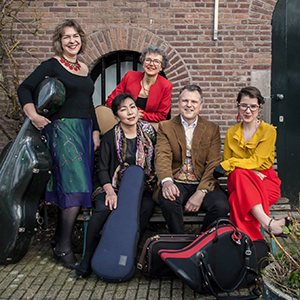 ‘Musica Aurensiana’ – born in December 2015 – was inspired by the amusement and flow on the stage during their first performance.

Since then they have committed to performing the rich musical heritage of the classical and early romantic period for string quartet and horn. Performances of this thrilling repertoire are rarely heard on today´s musical scene. Now “Musica Aurensiana” bring to a wider audience a celebratory, expressive and historically informed interpretation.

The interpretation is influenced by the fascinating sound transition from the middle of 18th to the middle of 19th century, when instruments, composition and performance styles were undergoing rapid development. Their performance finds a great balance between a mixture of well documented practice and their own musical taste. The expressive dialogue between the instruments gives the ensemble their unique sound.