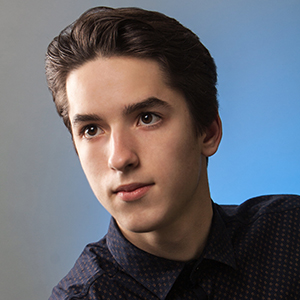 Illia Fialko was born in 2000 into a family of musicians. His father thought that Illia would choose a violin just like he had at one time, but his mother noticed a great craving for piano. At the age of five, his parents sent Illia to a music school where he showed love for classical music and hard work. After several years, the parents realized that their son wanted to connect his life with music and they decided to put him to a specialized music school named after Lysenko in Kiev, where he studied from 2007-2018. During this time, Illia became the laureate of many international competitions, he conducted active concert activities in Ukraine and abroad. The turning point in his life was the “International Chamber Music Festival” in Ede organized by Anna Fedorova. After the concerts and master-classes in Ede, The Hague and Amsterdam, Illia realized that he has only one dream, to study in the Netherlands. A year later, this dream came true and now Illia is a bachelor first-year student of the Conservatorium van Amsterdam in the class of Professor Naum Grubert.