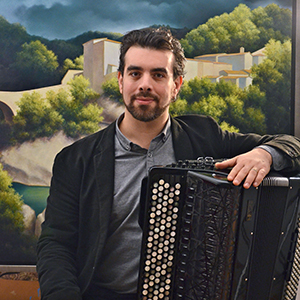 Claudio Jacomucci graduated with honors as a classical accordionist from Grenoble Conservatory (France) in 1992. He has studied accordion with Jean Luc Manca, Mogens Ellegaard and Vladimir Zubitsky. He was also graduated as an Alexander Technique teacher from the Alexander Technique Centre in Amsterdam in 2000 and has studied Contemporary Music through Non-Western Techniques at Amsterdam Conservatory.

He was invited as a jury member by international accordion competition in Castelfidardo, Klingenthal, Arrasate, Moscow, Pula, Valtidone and Novi Sad.

He has published the books Technique I for button accordion (Bèrben) and Mastering Accordion Technique: a new approach to accordion playing based on the Alexander Technique written together with Kathleen Delaney.

He is the editor of the series of books Modern Accordion Perspectives and coordinates an international expert panel of the leading classical accordion performers and teachers.