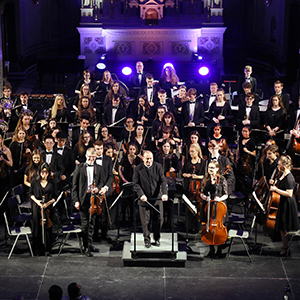 The City of Belfast Youth Orchestra was formed in 1955 on the initiative of Douglas Dawn, the Music Advisor of the Belfast Education Committee. This was the first attempt to bring together young musicians of similar age and abilities to play classical repertoire. One of the orchestra’s first members was Sir James Galway who recalls that in the early days that “we had quite a handful of flutes, brass by the ton and about 3 string players!”.

In 1964 Leonard Pugh was appointed Music Advisor to the Belfast Education Committee and inherited the post of conductor. Mr Pugh established The City of Belfast School of Music in 1965 and the CBYO became the most senior group. Over the next 25 years Mr Pugh developed the CBYO into a full symphonic orchestra of around 90 members.

In 1990 Stanley Foreman was appointed conductor and during his tenure the orchestra continued to grow embarking on extensive concert tours both across Europe and in the USA.

Since the appointment of Paul McBride as conductor in 2005, the CBYO has built upon previous successes attaining even higher standards of performance. Under the direction of Paul McBride and with assistance from Orchestra Manager Robert Briscoe, the CBYO continues to flourish.

The CBYO has a constantly changing membership. Approximately 1/3 of its members leave each year and are replaced by musicians who come from other bands and orchestras within the School of Music. For over half a century the CBYO has contributed significantly to the musical and cultural life of Belfast providing an outlet for its many talented young musicians.